Let us illustrate the diagrammatic expansion of integrals from Lecture 13 in a specific case: we will bring things full circle and look at “Stirling’s quantum field theory.” Going back to the very beginning, start with the Euler integral

Now make the change of variables 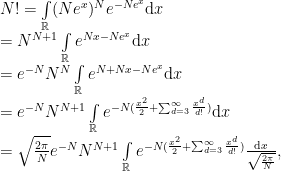 and we’re in position to apply our diagrammatic

expansion of the remaining integral.

The nice thing about the diagrammatic expansion is that most of it is “universal,” and it is not until the last step that we have to worry about what the smooth function in the exponent of the integrand actually is. In particular, from Lecture 13, we have that the coefficient of

is the sum of the following three numbers

are the three graphs shown at the end of Lecture 13, in the same order listed there. These are precisely the graphs of cyclomatic number

in which all vertices have degree at most

is the number of vertices, and the monomials

encode the sequence of vertex degrees. Now we just have to calculate the order of the automorphism groups of these graphs: we obtain

so that the coefficient of

in the asymptotic expansion of the integral is

Note that this has absolutely no dependence on what the integral actually is, so far: this dependence only enters at the last stage, where we plug in the values of the

-coefficients, which for the integral in Stirling’s QFT are all identically equal to

So the first two terms in the sum above cancel, leaving us with the conclusion that

Now to get the next order in the asymptotic expansion, the coefficient of

you have to write out all graphs of cyclomatic number

with vertices of degree at least

calculate the order of their automorphism groups, and evaluate as above. I am going to come back later and do this for you, but in the meantime you may want to try it yourself. It’s pretty tedious, but instructive. Actually, the fact that it’s tedious is an important takeaway: you can simplify your life greatly if you are willing to settle for the asymptotic expansion of

since then only connected graphs will enter into the calculation of the coefficients in the asymptotic expansion, and there are a lot less of those.

For a more involved version of the same procedure, where the “graphs” involved are of a quite different nature, you can check out my lecture yesterday in the UC Berkeley combinatorics seminar. Don’t worry if you don’t understand much; we are going to look at matrix integrals together very soon.