In Lecture 14, we considered a special type of linear operators known as orthogonal transformation, which were defined as follows. Let

is orthogonal if the image

of any orthonormal basis

is again an orthonormal basis of

We found that orthogonal operators can alternatively be characterized as those linear operators which preserve the scalar product, meaning that

Yet another way to characterize orthogonal operators is to say that they are invertible, and

This last characterization makes contact with a more general operation on operators.

Theorem 1: For any operator

there is a unique operator

Proof: We first prove that an operator with the desired property exists. Let

be an orthonormal basis in

be the operator defined by

That is, we have defined the operator

which is equivalent to saying that the

-element of the matrix

is equal to the

-element of the matrix

a relationship which is usually expressed as saying that

is the transpose of

Now, for any vectors 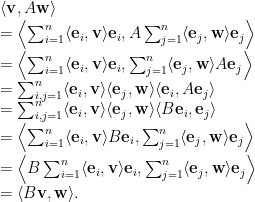 Now we prove uniqueness. Suppose that

are two operators such that

Then, we have that

In particular, we have

or in other words that

is the zero matrix. Since the map which takes an operator to its matrix relative to

is an isomorphism, this means that

is the zero operator, or equivalently that

the unique operator such that

According to Definition 1, yet another way to express that

is an orthogonal operator is to say that the adjoint of

is the inverse of

Operators on Euclidean space which are related to their adjoint in some predictable way play a very important role in linear algebra.

is said to be selfadjoint if

Owing to the fact that a selfadjoint operator

is said to be normal if it commutes with its adjoint, i.e.

Proof: This is very straightforward, but worth going through at least once. If

is an orthogonal operator, then

is a selfadjoint operator, then